Als er iemand is die eens wat aan z'n haar moet doen dan is het rossi zelf. Of zoals ze het op de BBC zeiden:
'He should have his hair cut. That should be good for a kilo or two'

edraket zei:
\'He should have his hair cut. That should be good for a kilo or two\' 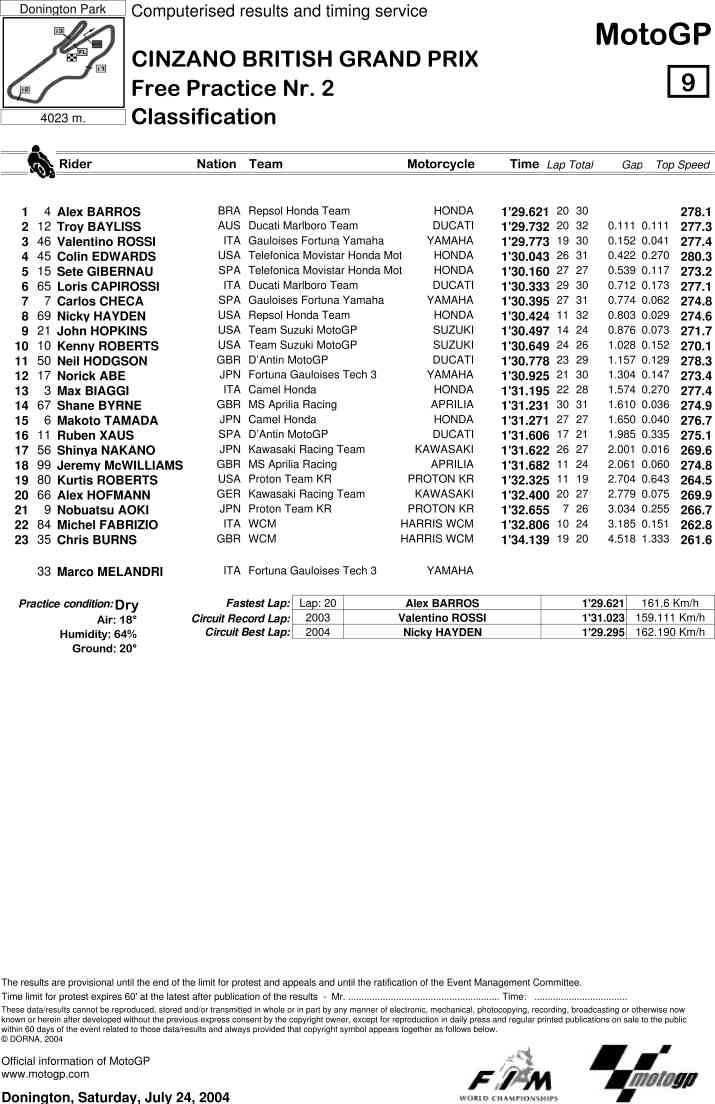 Marco Melandri’s cruel run of luck continued at Donington Park on Friday morning when the Italian youngster was hit by Alex Hofmann in the first free practice, forcing him to drop his Yamaha in the Melbourne loop and breaking his thumb in the process.

After his spectacular crash at Sachsenring just five days earlier, the fall was the last thing Melandri needed at a circuit where he qualified on the front row last season, and the former 250cc World Champion could not hide his disappointment.

“Towards the end of the morning session I was on a fast lap and about to overtake Hoffman,” explained Melandri, who went on to provisionally qualify eighth fastest despite his injury in the afternoon.

“Unfortunately he didn’t see me and pushed me on to the grass, causing me to crash. Straight away I knew I had hurt my hand, but I was very disappointed when the X-ray showed I had fractured the bone at the base of my right thumb.

“I was worried before the start of this afternoon’s practice that it was going to cause me big problems, but in the end it wasn’t as bad as I had feared. Sure it hurts when I am braking, and a little less when accelerating out of right hand turns, but it could be worse. Now the big question is how it will be over race distance.

“Apart from that the day went well. The grip here, with the new tarmac, is much better and the bike is working well. I’d say this is the first time we haven’t had to work too hard to get a good set-up.”

Melandri’s Race Engineer Guy Coulon was happy with his rider’s effort, but also expressed his concern about the youngster’s chances in the race. “Despite his injury, Marco managed to put in a good day’s work. The big question mark now is how many laps he can ride.

“Fortunately the track is much less bumpy than before, which makes it a little easier for him. In terms of set up, there isn’t much we can do to help him, except try and make the bike as easy to ride as possible, and that is what we will be concentrating on doing tomorrow.”
Klik om te vergroten...