For now this is going to be the fastest i've ever done a diary, it's just a really quick one to let you know my 2010 racing plans are finally resolved and i'm over the moon to tell you that i'm joining the all new Althea Ducati racing team to ride alongside Carlos Checa in the 2010 World Superbike championship, more to follow i promise!!!!!

Hey guys and girls, I’m real sorry that the announcement this morning was so brief, truth is I fired that up on the site real quickly as I was literally just about to head out on my pushbike for the morning and I didn’t want you guys to read on some website somewhere else first, like I said, it was brief but it did the job.
It’s been a very up and down week for me to be honest, Leon Camier came to stay with us along with his manager and his partner for a couple of days which was cool, Leon and I got on real well last year and still stay in touch a lot now, personally I’m really hoping he comes to WSB next year, he’s a cool kid, now, the big down, I took Leon, Andy and Jaqui out in my Vito and the conversation went like this, “have you actually brought this Shakey or is it through your sponsor?” Do you know what I brought it, I love the thing and to be honest I couldn’t imagine not having it, Petra and I take Zack and the dogs in it, I can fit and MX bike in the back with the seats still in, shit, I even brought my Harley down in it, albeit with one seat out, the things mega I replied…..
We drove towards the local kart track to go for a bit of a crack and approached a crossroads, we had the right of way and were travelling literally about 20-30mph, I saw a car coming from the right out of the corner of my eye but knew he had a stop sign, I looked across to show Leon the karts and BBBBBAAAAAAAANNNNNNNGGGGGGGGGGGGG!!!!!!!!!!! Matey hadn’t been looking and drove straight through the stop sign and ripped the front of my van off, the thing’s wrecked, fortunately none of us including the other driver were hurt and he admitted full fault and said he wasn’t looking and didn’t stop which is all well and good but how did that conversation go, I couldn’t possibly be without it……..
That then was the downside to the week, now for the big upside, late last night after conversations with my manager in the states and him having conversations with Genesio (my new boss) a deal was concluded, Genesio has been fantastic, I remember reading Carlos’ comments about him thinking blimey the guy obviously like Carlos but from my dealings so far he couldn’t possibly have been better, he’s been very fair indeed and all the things I was promised for last year he’s even included in my contract, the guy’s so genuine it’s fantastic. Carlos and I will have identical bikes which will be a very good spec, in fact as I write this Genesio’s in a meeting with Ducati going over exactly what the plan of attack is, I believe we may be testing in December at Valencia which will be mega to blow out the cobwebs because the next test after that is the Portimao test in January which would mean a good couple of months off the bike, fortunately for me I only had a week off when we got home after Portimao and I’m back full on training, I felt good at the end of the season in terms of fitness but I know that all the time I’m actually at home solid I can push real hard 5 days a week and that shows big time at the start of the season, I’m up to either running just over 10 miles every morning or cycling up to 50 miles then heading to the gym for some strength work in the afternoon so I’m feeling good, this deal being concluded is only going to make me push even harder, I’m so pumped, having Carlos as a team mate will be good and the overall hunger and enthusiasm of the team is a massive bonus, now I’m going to conclude this diary as it’s gym time, I’ve cycled this morning already so we’re on it. I hope you guys are as excited as I am about this, I literally can’t wait to get going!! Now, where’s the car key, the bloody van one’s no good to me now!!!!!!!!!!!!!

The Ducati Althea Racing Team has made a decision with regard to the next season of competition in the World Superbike Championship. Team owner and General Director Genesio Bevilacqua has reached an agreement with Shane Byrne who will join the Ducati Althea Team in 2010. The English rider will be team-mate to the Spanish rider Carlos Checa. “Shakey” as his supporters are usually calling him, participated in the last Superbike world championship riding a Ducati bike and reaching the eighth final position in the riders championship standing. Byrne was also able to reach a podium obtaining the second place in race one at Misano. The experienced English rider was two times British Superbike champion and he also ridden for two seasons in Moto GP world championship. With Byrne the Ducati Althea team confirmed their determination to be one of the top team of the next world Superbike championship.

Genesio Bevilacqua: ” I’m really enthusiastic to have signed Shane Byrne for our 2010 team. He’s proved to be a very skillful and successful rider in world Superbike and I’m are sure he will be a great combination with Carlos Checa. Shakey is an experienced and spirited rider, with him we are certain we’ll be able to challenge with the best and official 2010 Superbike world championship teams. We worked hard to organize a strong technical staff that will support in the best possible way our two competitive riders. We must thanks Althea, an international company who is used to working with important projects, but I would like to take this opportunity to thank all our sponsors who allowed our team to be competitive and particularly Unibat, one of the biggest worldwide battery producers who believe in our project”.

Shane Byrne: ” I'm extremely happy to say that I will join the Althea Ducati racing team for the 2010 WSB championship, Genesio Bevilacqua has been fantastic and from my talks with him so far I already understand he is a very serious, enthusiastic and ambitious person, he has put together a fantastic package that should enable both Carlos and I the opportunity to fight at a very high level so I look forward to this new adventure, remaining on a Ducati motorcycle was very important to me and I think in Team Althea Ducati I've found the perfect place, a good bike, a very strong and experienced team mate and an extremely motivated team so I can't wait to get started !”.
T 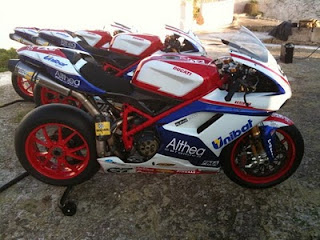 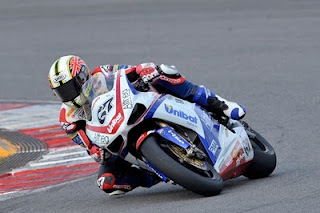